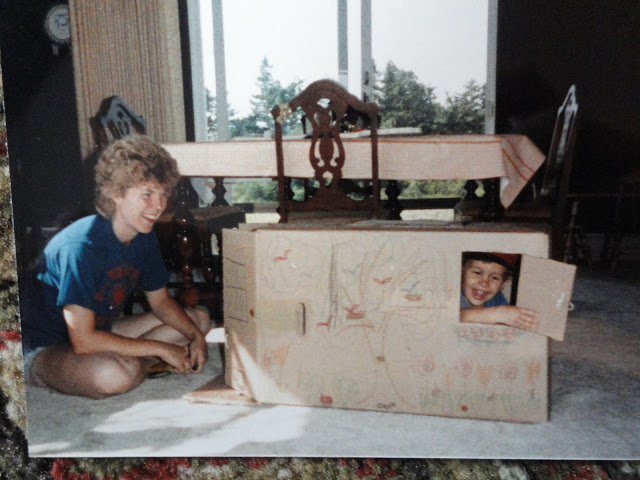 But, to a child is becomes a…
fort
space ship
garage
secret hide-out
boat
car
play house
maze
etc.
Years ago we had just moved to another state.  Many things weren’t unpacked yet and I was looking for something creative for the kids to do.  So, we took an empty box and turned it on its side.
We cut out windows and a door.  Later we added a left over carpet scrap (a rug would work also).
The next day we drew pictures on the outside of the box with crayons.
Flowers, trees, grass and insects appeared on the outside of our “house”.
A roll of foil was found and a “mirror” appeared inside.
Old greeting cards became pictures hanging on the wall.
Crayons and markers created elaborate borders for each piece of wall art.
Furniture was drawn on the walls to indicate which room of the house we were sitting in.
When some string was unpacked, we added handles to our window and door openings
to make them easier to open and close.
Every day, for weeks, we added something new.

Many years (yes years) of fun were had in that play box.
It also sparked ideas for many more creations that lasted until the kids
were in upper elementary school.
Their ideas became more elaborate as they aged.
We went through a lot of tape.  But the hours of fun and creativity it provided was well worth it!
After another move, when we had a fourth grader in the house,
the basement became consumed with a giant tunnel system created with our moving boxes.
Each day it become more elaborate as the design developed and became enhanced with things such as secret doors and spy holes.
Recently a young woman told me that playing in this cardboard maze in our basement
was one of her favorite childhood memories.
Who would have thought card board boxes could do that?

Playing with cardboard boxes is wonderful for dramatic role playing

and helps foster creativity in children.

Why foster creativity?  Architects, engineers, technology designers, teachers, carpenters, as well as actors, writers, musicians, and many more professions depend on creativity
to excel in their profession.
So, give your kids some cardboard boxes, a roll of tape and let their imagination go!
You will have to help make cuts if their design needs it.

Want an activity that may last the entire summer?

Contact a store that sells appliances and ask them to save you a box.
This could possibly be the best investment in your summer fun,
providing hours of play and creative opportunity for your children.﻿